Edited to add: This petticoat deflated significantly within the first few months of owning it and is now a low-medium poof petticoat. Whilst the shape is still awesome, the lack of durability has lead me to revise my overall ratings particularly given that my melikestea petticoats have shown no signs of similar deflation after being owned for over a year.

Poof: 5/10 - deflated too quickly
Price/value for money: 5/10 - I would much rather spend a similar amount of money on a longer lasting petti
Overall: 6/10 - I don't think I did anything particularly terrible to this petticoat to make it deflate (certainly not any more than previous ones) but I would not recommend or repurchase this petticoat.

Whilst on the never-ending quest for the one perfect petticoat to rule them all I stumbled across the Vietnamese indie brand Bunny House and was intrigued by their petticoats. Currently the petticoats offered are bell-shaped petticoats to customers' desired measurements, and the sizing - medium, large, or super large - refers to the amount of fabric used, number of layers and how much poof there is. I believe the material used is poly organza, and at the time of ordering I had the choice of five colours - white, black, light blue, pink, or purple.

I ordered the Super Large petticoat in purple, to fit waist 25" and asked for it to be 18" long. My order was placed during their August sale, which meant that there was a discount of 10% off the regular prices - the Super Large petticoat had a 'normal' price of $35 at that time, so it cost me $31.50 + shipping to the UK which was $15, for a total of $46. This is slightly more expensive than previous petticoats I have purchased, but I was also hoping for more poof! It's certainly not much more expensive than the Classical Puppets pettis, at least on sale.
Orders are done through facebook messaging, and payment is via paypal. I ordered on the 16th August, received a reply, and paid my paypal invoice within 24 hours. Due to the sale, there was no definite manufacturing time given although I believe their usual manufacture time is 15-20 days, and the next thing I heard was that my petticoat had been shipped on the 22nd of September. The parcel arrived within a fortnight - although since it wouldn't fit through the mail slot, the postman had to try again when someone was home!

Unfortunately, the parcel was damaged in transit and the outer packaging was ripped right down the side. Thankfully the inner plastic bag was intact so the petticoat was not damaged. Looking at the facebook page, this has been a problem for other customers so I wonder if the packaging needs to be improved to stand up to the demands of the global postage system...
The petticoat came in a plastic bag inside a brown paper package tied up with string... 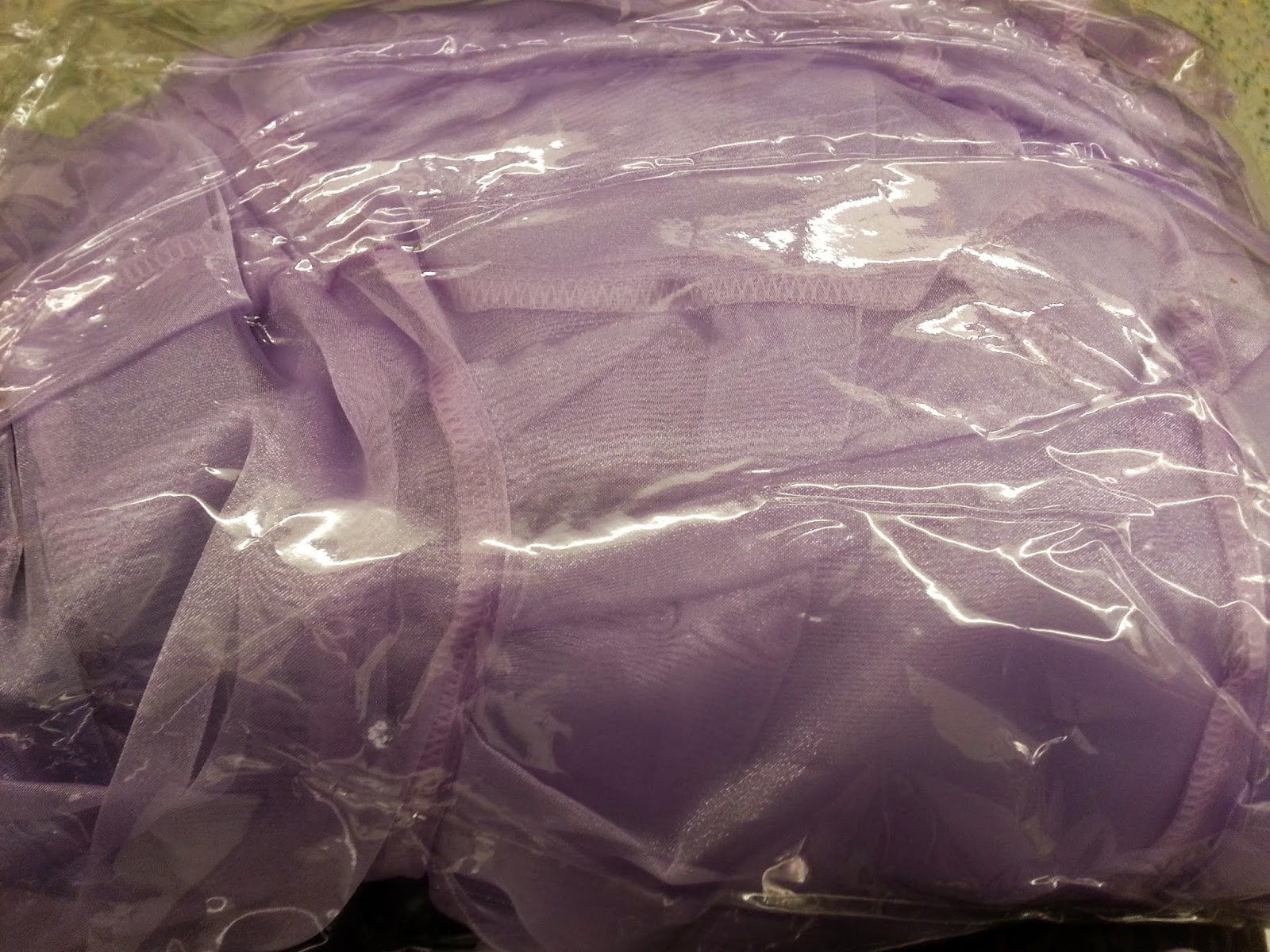 ...and when unpackaged, looked pretty much exactly like the photos.
The short version:

Actually ordering: 5/10 because there aren't options for people without facebook accounts. Basically, if you have a facebook then it's an easy 10/10, just like navigating any other order form and messaging, however there is no other option, which makes it a 0/10 if you don't!

Manufacture/shipping time: 7/10 - Slower due to the large number of orders they got with the sale, but still reasonable.

Packaging: 7/10 - Although I know that Bunny House didn't rip up the packaging themselves, there have been multiple mentions of torn outer packaging on their facebook. Thankfully the plastic bag was sturdy enough, but I would like to see something stronger used.

Since this was a custom-made garment, I compared the measurements of the petticoat to the measurements I had given. The length is exactly right at 18", and the waistband is 20" unstretched, 39" stretched, and sits comfortably both on my natural waist and slightly lower if desired. The waistband is created from the lining, so the lining would not be poofy enough to layer another petti underneath - however, with the amount of poof this petti has it isn't really a layering one! I was not asked for a hip measurement, which seems reasonable as the waistband is fully elastic and stretches comfortably to a large measurement - I imagine only the most extreme of pear shapes could potentially run into difficulties if this is representative of all their petticoats.
The petticoat is made up of multiple layers attached directly to the lining, with the bottom-most layer being a continuation of the lining. This could be problematic if you don't like the feeling of organza on your legs - however the fabric is not scratchy like tulle net. The middle layers are two-tiered with a doubled-over tier of ruffles at the bottom and the top layer is three-tiered and just a single layer. This gives a total of 8 layers of fabric at the hem. Construction-wise, the majority of seams are straight stitched with the edges serged/overlocked, which is appropriate to the materials used and in my opinion the best way to go with a fabric as prone to unravelling as organza (I mean, you could french seam it but that seems unnecessary for an undergarment). There was the occasional loose thread but nothing that was actually coming loose.

I noted that rather than being gathered to the layer above in the same way Classical Puppets pettis are, each tier was pleated every couple of inches. I think there are pros and cons to both approaches - all the Classical Puppets petticoats I have owned have eventually had holes between the tiers which I believe is because the weight of the lower tiers is too heavy for the tier above - however, you get more volume for less layers, and could probably save a bit of fabric overall. The Bunny House petti has more layers but less gathering - which probably saves time, but not necessarily weight. Either way, they represent slightly different ways of getting the poof.

Fit - 10/10. No complaints - I asked for a certain length and waist measurement, and it fits both.

Pattern/Construction/etc. - 9/10 - judgement reserved until I've owned it for a bit longer!

And of course - the poof, which is actually what everyone cares about right? I have now owned this petti for just over a month and a half and it's still poofy as anything despite being shoved in plastic bags and squished down, stored in a drawer etc.

I have worn this under a light, lined cotton dress with a single ruffle and two layers of velveteen to see how the poof would hold up - and honestly, I think this may be the poofy bell-shaped petticoat I've been hoping for.

Poof: 10/10 - I love this. It gives me my ideal bell shape under both heavy layers and lighter dresses. It might be *too* poofy for some though.

Price/value for money: 8/10 On sale, this is a really good deal - I'm not sure I'd pay full price for it, but then again I don't think there's a comparable petticoat around that's as easily available.

Overall: 9/10 - If you are like me, and love your layers of velvet but don't want to sacrifice your poof or wear more than one petti at a time, this is definitely one worth getting. I've taken a point off because it's not really as wallet friendly as some of the alternatives around.
Posted by scandium at Thursday, November 20, 2014

Email ThisBlogThis!Share to TwitterShare to FacebookShare to Pinterest
Labels: Review